Hello my Name is Jasmine Nadine. I am originally from a suburb of Basel, Switzerland called Laufen. Laufen is the home of Ricola, the manufacturer of herbal cough drops and breath mints.
Basel is Switzerland's third most populous city. Located where the Swiss, French and German borders meet in northwest Switzerland on the river Rhine. Basel is German and French speaking. I also speak Italian and English.

I grew up with a love for animals, and had several including horses. I was fortunate enough to be a member of the Swiss jumping team. As an only child I received a lot of attention and a fine formal education. I was aspiring to become a veterinarian when the need to see the world took over and carried me to the United States. 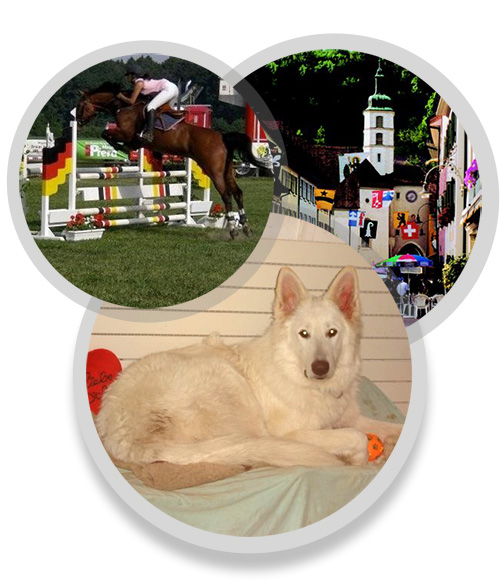 Growing up my neighbors bred dogs. This was my first exposure to breeding where I learned many things. For example, the necessity of understanding the genetic heritage of the breeding stock, the need for a consistent and high quality breeding environment, and how critical proper socialization is to the dogs and future offspring. I also learned that proper nutrition cannot be compromised and has to be consistent.

My first dog was a white shepherd (Berger Blanc Swiss) named Arthus. I loved him dearly and unfortunately he left this world prematurely at only 3 years old and I was devastated. I could not even consider the thought of owning another dog since I never thought anyone could replace my beloved Arthus.

However, a year later a friend from Milan invited me to visit and to my surprise his family acquired a magnificent French Bulldog puppy that instantly covered me with Frenchie kisses. It was at that moment that I fell in love with the breed.

After travelling the USA for a while I settled down in Orange County, California. Today I live with my boyfriend Jeff who shares my love of French Bulldogs. I have Athos my first French Bulldog. She is a chocolate brindle with a pedigree of many champion lines and a wonderful personality. I also have Porthos, a male who is a chocolate fawn that carries both blue and cream. If that wasn't extraordinary enough he tops that off with a build that is second to none and the most gentle character.

In my breeding program I strive to produce unique colors such as chocolate, lilac, black & tan, blue & tan, and hopefully someday chocolate and tan. Color isn’t everything, and I can’t stress enough my dedication to the standard of the French Bulldog as described by the AKC.

To sum up a little bit more about my kennel name: Three Musketeer Bulldogs. The slogan “One for all and all for one” is a motto traditionally associated with the novel The Three Musketeers written by Alexandre Dumas. It is also the traditional motto of Switzerland (Unus pro omnibus, omnes pro uno).